Blazin' Saddles ... Riding in the Footsteps of Hannibal

Eurosport cycling blogger and bicycling bon vivant FELIX LOWE (aka Blazin' Saddles / @Saddleblaze) launched his first book "Climbs and Punishment - Riding in the Footsteps of Hannibal" at the 'Look Mum No Hands' cycle cafe in London, with a series of personal readings graphically grandstanding his gruelling gastronomic Grand Tour from Barcelona to Rome across the Pyrenees, Alps and Apennines via Mont Ventoux. Uniquely Sporting was there to video the evening of bicycling banter.

ONE: Felix introduces his book and Grand Tour

"The entertaining story of one cycling fanatic's journey from bike writer to bike rider." 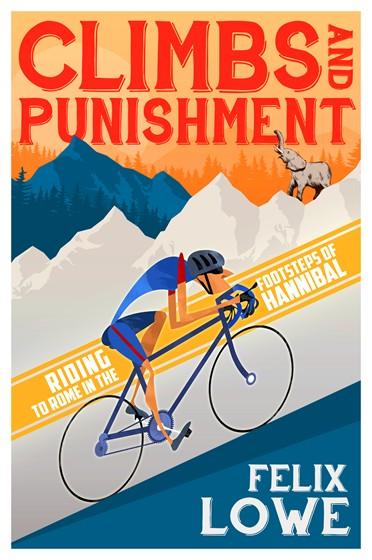 "Holy shit! That’s longer than a Grand Tour.
And is that Hannibal as in Hannibal Lecter?
It’s gonna be a bloody massacre!!"

Greg LeMond
3 x Tour de France winner
BANTAM BOOKS PUBLISHER DESCRIPTION
After years of reporting on the exploits of the pro cycling tour, Eurosport blogger Felix Lowe takes to the saddle to conquer the roads and restaurants from Barcelona to Rome.

Powered by local delicacies, painkillers and imaginary fans, Lowe pedals his way through three countries and over three mountain ranges, taking in some of the sport’s most fabled climbs. Following in the tracks of the world's greatest wheelmen, he puts professional cycling's three major stage races - the Tour de France, Vuelta a España and Giro d'Italia - under the microscope, whilst capturing the potent mix of madness, humour and human spirit that fuels stage winners and pedal spinners alike.

Tracing the footsteps of the celebrated Carthaginian general Hannibal, who led his own pachyderm peloton of thirty-seven elephants over the Alps and all the way to the gates of Rome, Lowe's epic quest pays homage to the sport, examines the psychology of both the crazed amateur and the pedalling pro, and delves into the awesome march of a military genius who almost brought the Roman Empire to its knees.
Entertaining story of cycling journalist Felix Lowe's leap from raconteur to rouleur, taking to the saddle for the first time in ten years to complete his very own grand tour of Europe, a 1500 mile route from Barcelona to Rome. Along the way he puts professional cycling's three major stage races (Tour de France, Vuelta a Espana and Giro d'Italia) under the microscope.
Lowe takes readers with him on a journey through the Catalonian countryside, over the Pyrenean foothills and the rolling plains of Languedoc, through the flowery fields of Provence, over winding Alpine passes, past the parks and palaces of Piedmont, and down the Apennine backbone of Italy.
BOOK REVIEWS
"Reading this book won’t tell you anything about the best gearing ratios to get you up Alpe d’Huez twice in one day, nor will it reveal much about what is the appropriate kit to be wearing as you tackle a blustery day on the Ventoux. What it will do is tell you pannier-loads about the places that we love watching cycling races in, barrels-full about the great wines and delicacies of the regions and a couple of Legions worth of nuggets about one of the most daring, bloodiest military campaigns of all time. And it will royally entertain you whilst it does so. More please Felix."
Howard Mark Smith on "TheJerseyPocket" (click here to read the full review)

"it's a cleverly constructed and well-written tale, while the inclusion of Hannibal's precedent over similar terrain lifts it well above the humdrum. it is not only hard to believe this is the work of a relative newbie to the art of pedalling, but that this is his first full-length book. i believe mr blazing saddles may well have hit the ground running, if you'll forgive the mixed metaphor."
Brian Palmer on "TheWashingMachinePost" (click here to read the full review) 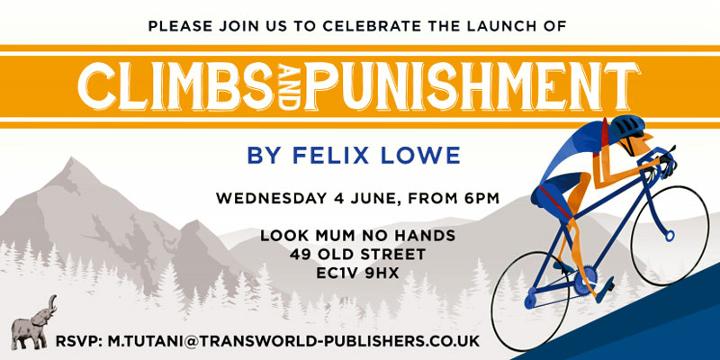 FELIX LOWE is best known by his alter ego Blazin’ Saddles, whose popular Eurosport blog has become the go-to place for an irreverent and authoritative take on the world of cycling. With a growing army of followers and a back-page column in Cyclist magazine he’s an exciting, fresh new voice on the ever-expanding pro cycle scene.